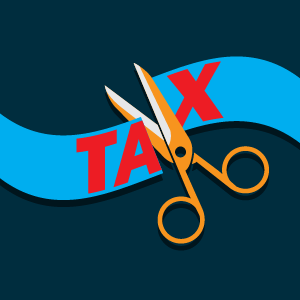 A business without capital can’t grow. Under-capitalization is one of the principal causes of failure of companies whether just starting or fairly well established. On the big business front, having capital on hand gives that board the ability to aggressively pursue new opportunities. There isn’t a single economist who will ever say that a business having cash is a bad thing. Unfortunately, tax cuts are a bait and switch. Yes, tax cuts put capital in the hands of the business, but they do nothing to incentivize investment. In fact, tax cuts do just the opposite. Tax cuts take capital right out of circulation and into the individual pockets of shareholders.

Societies have used governments to incentivize the actions of its participants, both the individuals and the businesses who service them. Incentives can be positive, such as letting a solo driver use the HOV lane if they’re in a hybrid, or negative, issuing a traffic ticket and collecting a fine for speeding. These two widely different actions provide an incentive to participate within certain parameters. The same things holds true on the business front. Tax cuts are sold to the public as a way to incentivize investment and job creation.  It goes like this: tax cuts give businesses more capital, more capital causes them to invest, investment causes the economy to grow. It all makes perfect sense. Anybody who has ever started or thought about starting a business asks themselves how much money they’d need early in the process.

For the young entrepreneurs giving up their nights and weekends to get their business off the ground, the tax cut argument holds true to a point. Lower personal income taxes create more capital to invest in that young business. This is the bait used to sell the idea. In the big money world of large, publicly traded companies, the wheels come off completely. You see, the board of a corporation is actually required, by law, to pay that capital to the shareholders. This is the switch.

Back in Michigan, in the early part of the 20th Century, the auto industry was dominated by Ford Motor Company. By 1916, despite barely being able to meet demand and having no real competition in the industry, Henry Ford kept lowering the price of his car. He also had around $60,000,000 on hand, a fairly substantial sum. Ford, a capitalist through and through, wanted to cut his special dividend and reinvest that money. His stated reason:

“My ambition is to employ still more men, to spread the benefits of this industrial system to the greatest possible number, to help them build up their lives and their homes. To do this we are putting the greatest share of our profits back in the business.”

This is exactly what we’ve been promised from the 2018 tax plan, the huge cuts to corporate taxes and those of the top earners; shareholders. Tax cuts will spread the benefits of the system to the greatest possible number of people. The reality is something completely different.

Back in 1916, we get the Dodge Brothers, Horace and John. They sued over Ford using that windfall for the benefit of current and future employees and won, forcing him to pay out that money to his shareholders. To paraphrase the court, a corporation’s primary function is to enrich its shareholders, what came to be known as shareholder primacy. Tax cuts create the same type of cash windfall Ford was looking at way back when and the fiduciary obligation of the corporation requires that cash to be paid out to shareholders, either directly via dividend or indirectly through stock buy back. Keep in mind, the shareholders already have enough wealth to own large portions of the corporation in the first place. These are not struggling entrepreneurs or folks struggling with a month to month budget. This payout does nothing for the rest of us. A tax break on the other hand, that does something completely different.

Breaks and cuts are two different things, at least from a layman’s perspective. A tax cut lowers the base rate of tax paid. For an individual, having your base tax rate go from 28% to 24% is a tax cut. A tax break would be something along the lines of allowing a tax credit for property taxes. Both approaches lower your overall taxes paid. The credit, depending of course on your income and all that, could effectively lower your taxes further than the cut provided you purchase or maintain a home. The credit incentivizes home ownership and, in the case of falling real estate markets, could bolster those markets, slowing or even potentially ending the fall; the purpose of the tax break. Let’s apply this same theory to corporations operating in the United States.

What we as a nation need are good paying middle class jobs. Business needs customers and in this country that means middle class buying power. How do we incentivize the creation of those jobs? With tax breaks versus tax cuts. The first step in the process is to raise the overall corporate tax rate, regardless of where that business in based. You want to do business in the largest consumer economy in the world, you pay taxes just like the people who live here. The next step is simple. You give those businesses clear and straight forward ways to lower the taxes paid via breaks, incentivizing what the society needs, which in this case is good paying jobs. How?

A high corporate tax rate combined with three simple ways to reduce the taxes paid to zero. Then let the free market do the rest.

A successful corporation has to decide to pay taxes on income or reinvest that money directly back into the American economy. It’s as simple as that. Need a bigger tax credit? Pay your workers higher wages; contribute to their pension. Still not enough? Build a factory here and fill it with American made equipment. This doesn’t inhibit growth, it encourages it. As billionaire venture capitalist Nick Hanauer so clearly says, consumers are the real job creators (https://www.washingtonpost.com/blogs/ezra-klein/post/the-ted-talk-ted-doesnt-want-you-to-hear/2012/05/17/gIQApiO9VU_blog.html?utm_term=.9c9073650961). There is no better consumer in the world than a middle class American. What it does is incentivize corporate investment in America, versus sending cash overseas and paying off shareholders. And the shareholders? They still make money, just through growth versus dividend.

This is free market business at its finest; the supply and demand economy we grew up learning about. Quality product creates consumer demand. To meet that demand, business increases production by hiring workers, building factories, buying equipment. All three of which create more customers. Repeat.

How to Join IATSE Local 122

Schedule an In-Person appointment with the Union Hall